Pizza shop floor gets a concrete grind in Horsham

For anyone who has eaten Pizza in Horsham they surely would have visited Bonnie & Clyde’s at some point. The building itself is something to admire, the pizza is great too!

It’s a rustic brick building with gorgeous exposed timber beams and a large open fire, it’s welcoming and warm. However there was an area that needed some renovating… the toilets! Existing tiles had been removed due to movement in the concrete slab and cracking, instead of re-tiling the proprietors decided they wanted something more modern and up on trend. So they contracted us.

What a tiny little space to manoeuvre a large bulky concrete grinder!

The floor was grinded back to expose the wonderful stones underneath, it was grouted and sealed. Because of it being a wet area, polishing is not really advised.

The end result looks great. Have a look next time you’re dining out at Bonnie & Clyde’s, even old concrete can look amazing with the right amount of work. 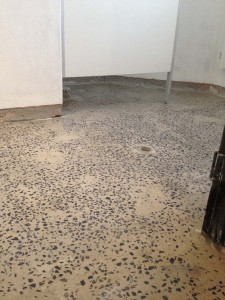